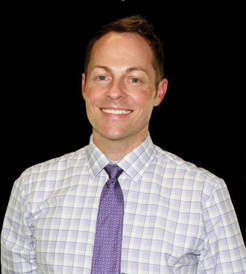 ​Dr. Howell is a psychologist who has dedicated himself to advocacy and support of the LGBT community for just over 20 years now. As an undergraduate student he found himself on the front lines of HIV prevention work where he provided community workshops and volunteered at an AIDS Service Organization spanning 3,000+ square miles in rural Texas. For the past several years, he has worked to create a safe space in Tampa for LGBT individuals in need of mental health services. Over the past year, he has made a tremendous mark in his work with the transgender community by providing free group therapy to transgender and gender diverse youth as well as their parents.  As an openly gay psychologist, educator, and LGBT expert, Dr. Howell strives to shed light on bullying, suicide, and homobigotry when possible. He expanded his solo practice to become the Center for Psychological Growth and is eager to make an even larger presence in the LGBT community. His vision of starting a nonprofit came to fruition in  2017 when he co-founded the Institute for LGBT Health and Wellbeing with Drs. Scally and Caramiello, with an emphasis on training, education, and LGBT research regarding health, wellness, and healthcare disparities. The ultimate goal of the nonprofit is to create a summer retreat or camp for LGBT youth, a drop in and donation center, and serve as a conduit for social change.

He has used his role as an associate professor and Director of Practicum Training at the Florida School of Professional Psychology to create LGBT courses for doctoral students and develop clinical training opportunities for doctoral students to receive competency training with LGBT patients. His passion for social justice was the inspiration for his Community Psychology courses and has brought students to the forefront of national leadership and advocacy efforts with APA and the Florida Psychological Association (FPA).

Dr. Howell leads by example and served as an LGBT representative on the Hillsborough Diversity Advisory Council as an inaugural member who was appointed to two terms (first as a a member and ended his term as the vice-chair of the council) and has been nationally recognized as a “Guardian of Psychology” by the American Psychological Association of Graduate Students Advocacy Coordinating Team.  He is a former secretary of FPA and former FPA Diversity Committee Chair. He is also a former president and chapter representative to the Board of Directors of FPA for its Bay Chapter. He recently received the FPA Early Career Psychologist Award for his contributions to FPA as an ECP and was previously recognized for his contributions to FPA.  He has given countless hours of his time to fighting LGBT causes at the local, state, and national levels.  He has provided and continues to provide pro bono services to survivors of the Pulse nightclub shooting.  He spoke before the Tampa City Council on the need for banning conversion (reparative) therapy for LGBT individuals, a ban that was approved unanimously.   He served on the executive committee of the National Council of Schools and Programs of Professional Psychology as the chair of the Sexual Orientation and Gender Diversity Committee and worked with programs to assure competency is a priority for graduate students working with LGBT individuals.  In his role as NCSPP SOGD Chair, he served as a liaison to the American Psychological Association’s Committee on Sexual Orientation and Gender Diversity.  He is the current APA Division 44 (LGBT) President. He has served many roles within the division as Clinical Issues Committee Co-chair, Fundraising Coordinator, Mentoring Committee Chair, and as Convention Programming Chair and Suite Coordinator.

As a chair of the FPA Diversity Committee, he worked to educate psychologists and other mental health professionals on the unique needs of the LGBT community and how to be affirming providers. As a result of representing FPA as the Florida Diversity Delegate to the APA Practice Leadership Conference, he was elected as the 2018 Diversity Delegate Liaison-elect and served as the 2019 Diversity Liaison and Diversity Subcommittee Chair for the APA Committee of State Leaders.  He leads all efforts of his university’s involvement in LGBT equality events and the practice participates in pride events as well. He takes a team of graduate students and psychologists each year to ride in the SmartRide to support HIV/AIDS services in Florida. They ride 165 miles from Miami to Key West each November, and 100% of the monies raised goes back to Florida HIV/AIDS organizations. They have raised nearly $40,000 as a team since beginning the ride in 2012.

Dr. Howell is a recipient of the 2016 Florida Diversity Council’s LGBT Leader Award and was an inaugural honoree of the 2016 Tampa Bay Business Journal’s LGBT Voices. ​The Center for Psychological Growth one the 2017 Tampa Bay Business Journal's LGBT Voices Community Enhancement Award. His commitment to the LGBT community began during his undergraduate years, where he advocated for HIV awareness on his college campus (Austin College).  His love of advocacy and activism is contagious, and he has inspired many graduate students to become advocates and change agents.  He truly lives his life according to his favorite quote: “Be the Change You Wish to See in the World" - Gandhi.

Dr. Melina Scally is a Licensed Clinical Psychologist who joined the Center in 2015. Her practice works with individuals aged 10 to 70+ from a diverse range of backgrounds. She works predominantly with mood disorders, such as depression, bipolar, and anxiety, as well as relationships, sexuality, addiction, personality disorders and life changes.

Dr. Scally received her doctorate in Clinical Psychology in 2014 from Florida School of Professional Psychology at Argosy University in Tampa, Florida. In addition to generalist coursework, she completed an additional concentration in the assessment and treatment of couples and families. Her training experiences included private practice, outpatient community mental health, outpatient detox programs, inpatient mental health and addictions, crisis center, and the public school system.

​Outside of the therapy room, Dr. Scally works closely with colleagues and students to promote diversity and advocate for inclusion among those who experience adversity on a daily basis. She has specific interests in advocating for the LGBTQ+ and Deaf communities. She has participated annually in The SMARTRide, a charity bike ride that benefits those living with HIV/AIDS and she was recently honored as a 2017 Tampa Bay Business Journal PRIDE Ally. She has presented on these topics nationally.

​She also teaches graduate psychology courses, bringing in the perspective of the local clinical-scientist model to enrich course content and create a more realistic sense of application. She has presented on topics of stress management, diversity awareness, and relationships. She also serves on the Board of Directors for the Florida Psychological Association and the Institute for LGBT Health and Wellbeing, a non-profit organization.
Dr. Scally’s broad experiences are a tribute to her interest in helping others improve their lives. Acknowledging that no two people or problems are alike, Dr. Scally approaches each person using a foundation based on building a strong working relationship, empowering the client to take ownership of their change, and tailoring therapy to meet the client where they are at based on a collaborative set of goals.